About the Anatolian Shepherd Dog

Anatolian Shepherd Dog is the Western breed name for the indigenous livestock guardian dogs from the historical region of Anatolia, in modern Turkey.  'Anatolian' is a non-anachronous reference, used by International Kennel Clubs (FCI, ANKC, AKC) to identify the collective Çoban Köpeği of Turkey, and to reflect their development as a landrace shepherd's guard dog, utilised since antiquity.  A wide range of different types of large, strong dogs are used by the Turkish shepherds to protect their flocks.  These dogs have always been known as Çoban Köpeği - Shepherd's Dog.

The earliest pictorial evidence of Çoban Köpeği in Turkish culture, is depicted by Court Painter Levni, and can be seen in Topkakyı Palace Museum: a grey shepherd's dog with cropped ears and wearing a traditional collar, marches with the shepherds before Sultan Ahmed III in 1720 - in grand Ottoman Court ceremony for the Sultan's heirs to the throne. The unique kinship between Turkey and Her national dog: Çoban Köpeğimiz - Our Shepherd Dog - was first documented by Veterinary Professor of Istanbul University Cafer Fahri Dikmen, under Mustafa Kemal Atatürk in 1927.  For many years Ankara Zoo proudly displayed its native dog exhibits under the taxonomy: 'Çoban Köpeği'.  In acknowledgement of the Çoban Köpeği's time-honoured partnership with Turkish shepherds, and the Çoban Köpeği's identity as a native animal of the Republic of Turkey, the Turkish Government issued a stamp depicting the dog's image and name: 'Çoban Köpeği' in 1973. Bred for millennia to guard flocks travelling on the Anatolian Plateau, the Çoban Köpeği is a dog of notable size and stamina. Its hardy physical constitution reflecting that throughout its ancient lineage, the Çoban Köpeği has been bred to guard and defend, while withstanding extremes in climate and terrain.  In its Turkish homeland, the Çoban Köpeği protects flocks and serves as shepherd's companion.  On the high Anatolian Plateau, where summers are hot and very dry and winters are cold, the Çoban Köpeği lives outside all year round.  For centuries it was used as a combat dog in war and for hunting. As a shepherd’s dog, it is bothered by neither fatigue nor bad weather, and is valued for its victorious battles fought against wolves.
Today, Turkey’s native Çoban Köpeği is still used as a shepherd’s front line defence of his flock from predators, as well as a guard dog.

In Australia, Anatolian Shepherd Dogs are widely used in a working capacity to guard sheep, goats, chickens, alpacas, horses and are renowned for their dedication to their livestock charges, and unsurpassed loyalty to their human handlers.  They may also be found in semi-rural and suburban environments, in the role of family guardian and companion.  Anatolians are an adaptable, strong, hardy, long-living dog, but due to their large size, strength and wilful nature, require a home where owners will give the young Anatolian the obedience and socialization training necessary, for it to develop into a well-adjusted family member. The Çoban Köpeği of Turkey is registered as Coban Köpegi under the Fédération Cynologique Internationale (FCI); and Anatolian Shepherd Dog under the Australian National Kennel Council (ANKC).

In Turkey, the Çoban Köpeği is identified as Kangal, Tuzköy, Yoruk, Haymana, Aksaray, Karabaş, Akbaş, Guregh, Karapınar, Güdük etc - depending on the dog's function, physical form and region of origin.  There are several canine organizations in Turkey:
KIF registers standardized Kangals and works from a Breed Standard drawn up in 2010, last revision 2012, with focus on developing a new standarized Kangal Breed that will meet the expectations and registration requirements of the FCI and foreign kennel clubs/breeders/interest groups.

ANKADER focuses on preserving Kangal and does not seek approval into foreign registries.  ANKADER differentiates according to morphology typicity - not colour.
BOZ SHEPHERD focuses on dogs of Tuzköy, Urfa, Guregh strain and groups them under the breed name 'Boz Shepherd Dog'.  Boz is a colour and the name of foundation dog 'Boz İmparator' from Nevşehir province, and purchased as an adult dog by the club founder.
NATIVE BREEDS COUNCIL is a collaborative effort of old dog clubs, foremost KARABAŞ and AKBAŞ (Doğan Kartay), KANGAL (Ankader).  Their focus is education and preservation of native Turkish dogs. 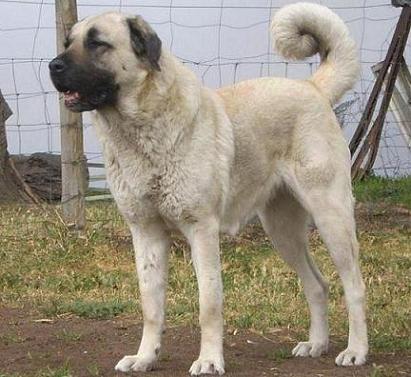 The morphology of the Anatolian Shepherd Dog has evolved over the ages to suit a specific set of circumstances.  The most formative of these circumstances being climate; the lifestyle of the shepherds; and the work assigned to the dogs.  The general appearance of the Anatolian Shepherd Dog is a tall, rugged and powerful livestock guardian dog, with a dense double coat; broad strong head; well-developed muscular shoulders; and a long tail with a slight curl (reaching to the hock), that is carried high and curled over the dog's back when alert.   The physique embodies balance and strength.  Movement of the Anatolian Shepherd Dog should be supple and powerful.  A low head carriage which shows the head, neck and topline being level when moving - creating the impression that the dog is stalking - is an important characteristic of the breed.

Coat colour and markings are secondary to sound structure that will engender a resilient and effective guardian dog.  Çoban Köpeği appearance "Must have size and stamina; capable of great speed" and be "Large, upstanding, tall, powerfully built".

In keeping with its primitive lineage, coat colour in the Anatolian Çoban Köpeği may be all colours and includes all expressions of the Agouti gene.  Eg: wolf sable (wild type a^w), black and tan pattern (a^t), recessive black (a), as well as the most predominant coat colour and dominant phenotype: fawn coat (sable a^y) with black mask.

Breeding selection criteria based on idealised markings and colour combinations, are the luxuries and priorities of pedigree kennel club fanciers.  Traditional, utilitarian dogs had to perform - to select breeding stock based on how black or velvety a dogs muzzle or ears are, is to breed away from Turkish tradition and towards an American / English one.

In Turkey, dogs of fawn / light dun colour and black mask, are not confined to being 'Kangal'.  Nor are all Kangals fawn / dun coloured dogs with black masks.  Yoruk, Kangal, Tuzköy, Aksaray can all be a light fawn/dun colour with a black mask.

Comparing different types of Turkish Shepherd Dogs
The following are photographs of Shepherd Dogs in Turkey.
These dogs are not Turkish Kennel Club registered Kangals.
These dogs are owned by shepherds and dogmen in Turkey and identified as:
1. Tuzköy  2. Haymana and Yoruk lines  3. Brindle Kangal  4. Kangal   5. Aksaray  6. Tuzköy
7. Yoruk from Denizli  8. Tuzköy  9. Tuzköy  10. Kangal  11. Kangal  12. Aksaray