RATIONALE FOR CHANGE OF BREED STANDARD FCI Standard No. 331 is the current breed standard for Anatolian Shepherd Dogs in Australia.

To mitigate the consequences of the 2018 FCI Standard revision, owners of the breed in Australia, request the breed change from the FCI Standard – Kangal Shepherd Dog, to the Country Of Development Standard - ANKC Kangal Dog with amendments, to allow for colour.  The ANKC Kangal Dog standard is owned by the ANKC and therefore ANKC can make changes to the standard.  Changing to the ANKC Kangal Dog standard will prevent disenfranchisement of Anatolian Shepherd Dog owners, and avoid deleterious outcome of a breed split.

ANKC is Country Of Development:

ANKC policy on adopting breed standards allows for owners of a breed to change from FCI Standard to Country Of Development Standard.

NBSC defines ANKC as the Country Of Development for the breed.  The ANKC Kangal Dog breed standard is the first recognised standard for the breed, and was recognised and registered in Australia in 1998 and adopted by New Zealand in 2002.

FCI / KIF do not qualify as Country Of Development / Country Of Origin for the breed.

The first Anatolian Shepherd Dog breed standard in Australia did not allow all colours. Colour in the breed has evolved each time the ANKC adopted Standards for the breed.

1985-1987 (pre1987 KC ANATOLIAN KARABASH): A whole coloured dog of all shades of fawn.  Characteristic black mask can vary from the desirable whole black head to just a black muzzle and dark ears. White socks and chest blaze commonly occur.
1987-1995 (KC ANATOLIAN SHEPHERD DOG): All colours are acceptable but it is desirable that they be whole colours, cream to fawn, with black mask and ears.
1996-2018 (FCI ANATOLIAN SHEPHERD DOG): All colours acceptable.
1998-2011 (ANKC KANGAL DOG): The head invariably has a black mask, dun to grey, white blaze on chest.

The reason for convergence and divergence over colour in the standards, is because colour has always divided breed enthusiasts.   Historically colour and coat pattern in the absence of pedigrees was used as indicator of ‘purity’.   Underpinning the breed’s development, breed name changes and colour amendments, was the belief that colour determined breed identity.

As Shepherd Dogs of Turkey did not have pedigrees, or a recognised registry (KIF formed in 2010) statements about colour were the yardsticks for ‘purity’.  Hence ideas such as purebred Kangals do not have excess white;, black mask indicates purity, black nails further indicate ‘pedigree’, became the points of difference.

In Turkey, Kangal clubs have also been unable to decide on ideal colour.  From 2010-2017 the KIF Kangal breed standard accepted brindle colour.  In 2006 the FCI submission on Kangal suggested brindle, brindle and white, and black colour.

Essentially the difference between all the breed standards for Anatolian / Kangal  is what colours are acceptable and how much white should or should not be allowed.  The reality for owners of the breed in Australia is the overview that colour is not omni-important, and cannot be omni-important.

A colour amendment to 'All colours acceptable but it is desirable they be whole colours with a dark mask' is the appropriate colour clause for the breed in Australia.
A colour amendment can only be enacted under a change of Standard to ANKC Kangal Dog.

Splitting the breed into Kangal and Anatolian

ANKC ‘split’ the breed according to colour in 1998 with the simultaneous recognition of Anatolian Shepherd Dog (all colours) and Kangal Dog  (fawn black mask only).  The inevitable result was a reconvergence of the two breeds 13 years later in 2011.

A significant factor to the ANKC breed split failing, was one breed was ostracised from international recognition and could not import from its main genetic exchange in Europe and America.  The second factor was the ostracised breed was then reliant on incomplete or blank pedigrees, which were prohibited for re-registration by ANKC Regulations.  Logically if a breed is ostracized from genetic exchange, it fails.

The breed split from 1998 – 2011 had catastrophic consequences for Anatolian Shepherd Dogs and Kangal Dogs in Australia.  Due to the majority of dogs being rural and farm working dogs, and not active in conformation shows, ANKC and the broader pedigree dog community did not see the decimation of the breed, and the collapse of a vibrant breed community.

The two waves of imports for the breed, 1985 - 1997 and 2010 - 2017, coincide with the beginning and end of the 1998-2011 ANKC breed split.
Imports ceased in 1997 because breeders could no longer see a future in the breed, and breed entrants diminished because the breed(s) they encountered were in a dysfunctional state. Breed splits disenfranchise breeders because the pedigree history of the breed, which underpins a breeder’s connection to it, is erased.
Registries enact breed splits for Anatolian and Kangal because on paper it seems like a simple solution and the consequences are unseen.
The experience and reality for owners is breed splits solve problems in theory, but destroy breeds in actuality.

In Australia the breed has only thrived under the ‘one breed’ model of FCI and AKC.

For more information on the 1998-2011 ANKC breed split with photos of Kangal puppies and Kangal dogs see Making Anatolians into Kangal Dogs: The Australian Outcome and Experience The breed name which introduced the dogs to Australia in 1985 and marketed them as stock protection dogs for sheep and goat farmers was 'Anatolian Karabash'.  Karabash is still used as the breed name by older generation farmers to identify their dogs today.

Karabash, from the Turkish kara and baş, translates to ‘black head’, and is one of several traditional descriptive names for Turkish Shepherd Dogs.   In ideological terms, ‘Anatolian Karabash’ was the precursor to Kangal Dog. ANKC Kangal Dog (1998) came about from Anatolian Shepherd breeders in Australia who were opposed to the change of standard from KC (which was based on Anatolian Karabash ideals, ie must have a black mask) to FCI, which allowed all colours, and did not place emphasis on the ‘characteristic black mask’.  Ironically, far from proving Kangal is a distinct breed from Anatolian because the Kangal breed 'always breeds true' (ie the Kangal has a black mask and is never white spotted), the ANKC Kangal Dog breed split demonstrated unequivocally that 'colour' is not an indicator of pedigree.  Under scrutiny of a registered breed population with generational record it became apparent that rough coats, excess white, recessive liver and black tan, and no black mask, was not the bane of 'mixed breed' Anatolian Shepherd Dogs - Kangal (Karabash black head) x Akbash (white head) x Kars (long coat) - but the genetic reality of a Turkish Shepherd's guardian dog with the Agouti allele.

During the breed’s early registry years, it would be anathema for Anatolian Shepherd Dogs (dogs with ‘impure’ coat indicators) to be Kangal Shepherd Dogs. From 1998 to 2011 the separate breed recognition of Kangal Dog in Australia demonstrated colour was not crucible to breed identity.  Rather more importantly, the function of the dogs - their ability to do their job as guard dogs of livestock on farms in Australia - was paramount to their breed identity as 'guard dogs for sheep and goats, hard working, capable of enduring extremes of heat and cold'.  Unlike the Kennel Club England, Australia's utilisation of the dogs is largely in rural working homes, either as bonded dogs to stock or roaming farm guardians on expansive allotments of land.  Owners of the breed in Australia arrived at the 2018 classification conclusion of FCI and Turkish Kennel Club, in 2011: Anatolian Shepherd and Kangal are alternative breed standard names for the same population of dogs.  Since 2012 the breed in Australia has thrived, and Australian dogs are exported to all main registries FCI, AKC, NZKC as breeding stock .  The breed in Australia is esteemed for its hardy breed type and preservation of working ability, developed from outdoor Australian conditions, by Austraian breeders, and ANKC registry outcomes since 1985.

In 2018, FCI Anatolian Shepherd Dog = FCI Kangal Shepherd Dog, is a practical solution for the breed in Europe to integrate FCI's new member Turkey into their studbooks.

Likewise in 2018, a change of Standard to Country Of Development Standard - ANKC Kangal Dog, is a practical solution for the breed in Australia, and gives stewardship of the breed to the owners and registry, which registered the breed first:

Australia’s expansive sheep and goat enterprises has contributed to the breed’s acceptance as a livestock guardian dog beyond the borders of Turkey, and developed its breed identity as a guard dog of livestock and farm assets for agricultural industry.

The Anatolian Karabash has a big future in Australia not only protecting sheep from predators but guarding valuable livestock against thieves.
Dean Beynon, IRADENE , 1985

The breed’s identity as a guard dog of farm assets, and the breed’s primary utilization as a working dog in Australia, is the result of extensive promotion by breeders to establish the breed as a successful livestock guardian dog in Australia, and breeders’ efforts to breed a dog suited to Australian working conditions and which met Australian farmers’ requirements.

The working conditions and requirements of the dogs in Australia and the livelihoods and assets of Australian farmers, are very different to the generally impoverished Shepherd in Turkey and his herd of goats and sheep.   Australian farmland is fenced, and the dogs are required to protect valuable assets against four and two legged threats.

In 2018 the dogs are utilised to protect diesel fuel lines in outback Australia and silos of grain supplies for export.  They are employed to guard and watch over cattle and sheep intended for live export and have differentiated into guard dogs of large free range chicken flocks (up to 30,000 birds) to protect against wedge tail eagles and foxes.  They live out with their stock unassisted and rely on automatic feeders; hardy constitution and good instincts nurtured by the breeder; and good training and rearing by the farmer.

Australian outdoor conditions, differential guard targets, and ANKC registry outcomes, have resulted in the breed population in Australia developing into a larger and more colour diverse dog than described by the 2018 FCI Kangal Shepherd Dog breed standard.  The sheep and goat guard dog of the Turkish Shepherd has been developed into an imposing guard dog of livestock and farm assets for Agriultural and Farming Industry in Australia.

“It must be realised that the conditions under which Anatolian Karabash Dogs are utilised in their native Turkey, and the conditions under which they will have to work in Australia, are entirely different.
We are in fact asking a great deal more of them under paddock conditions, in Turkey they work in conjunction with a shepherd for most of the time.
In Australia, we will be expecting them to work in the field, without any supervision.  They will also be expected to camp out at the mercy of the elements”. 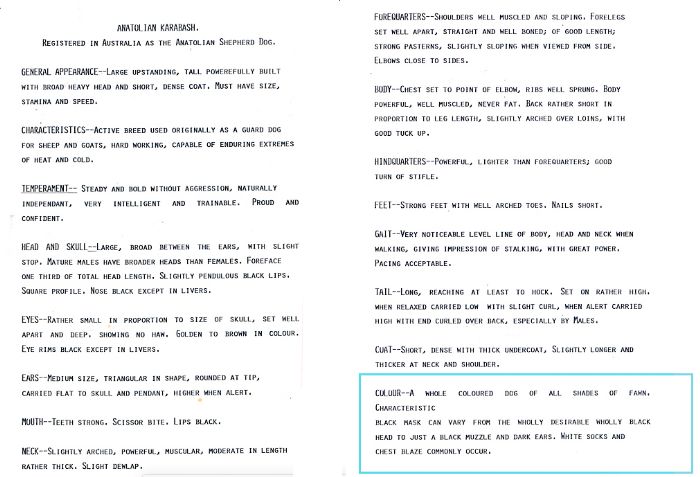